The J.A. Carrel itinerary winds for thirty kilometres in the Breuil basin in the shadow of the Matterhorn between views and landscapes of rare beauty. A route full of personality able to arouse in today’s excursionist those intense emotions which hunters and shepherds before and explorers and mountain climbers later, have always experienced at the foot of the Gran Becca.

The itinerary begins from Perrères, at an altitude of 1850 metres, to climb on the right orographic side of the valley as far as beyond the limit of the woody vegetation; it travels the ancient paths which connect the “tramail”, the highest pastures, before moving into a wild and striking environment, the moraines at the foot of the Gran Becca, to reach the Orionde Refuge at an altitude of 2808 metres.

From here the glance dominates the valley; from here the Matterhorn is so close to reveal its most intimate forms, its most cramped ravines.

The return itinerary to Perrères descends on the left orographic side, more marked by human presence. It transits between the testimonies of the most recent history which have made Cervinia famous around the world to move south, among green pastures until it faces onto Valtournenche, cradle of the protagonists of the history of these places.

The descent into a magnificent wood of larches, a filter between wild nature and civilisation, takes us back to the valley where the adventure began. 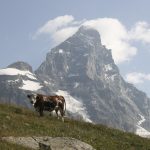 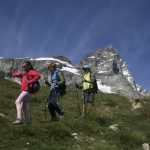 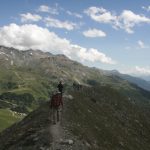 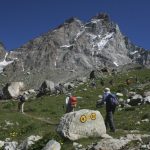 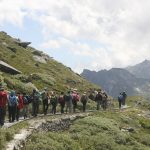 Jean Antoine Carrel “il Bersagliere” was born in Cretaz in Valtournenche in 1829 and worked as a shepherd and farmer in his youth. A hunter and great climber, he loved his homeland which led him to acquire a great skill in climbing and travelling the mountains in safety; he was called Bersagliere (marksman) because of his participation in the War of Independence. Over the years in which explorers and mountain climbers began to become interested in the Matterhorn he was the only man of the valley who believed in the possibility to climb the Gran Becca (name which the Votornen, residents of the valley, gave to the Matterhorn). In this passion he glimpsed a new trade and perceived a future for himself and his people. He was a coarse and determined man, a proud and difficult person to deal with; as a guide he was unparalleled for his bravery, safety and courage. His friend-rival Edward Whymper will consider him “the most elegant climber he has ever seen”, the only one with whom it is possible to reach the top of Gran Becca.