In the pastures of Tramal Dameun (“higher-level transformation”, 2390 m a.s.l.) of Alp Promindoz stands a chapel in crystal and metal, built in 1994 by the Bich family in the presence of the Matterhorn and the Grandes Murailles. Though equipped with a micro-bell tower it is too small to contain the faithful, nor does it want to: it is simple transparency, a symbolic reference which lifts the glance well above the Gran Becca, to the heights of the spirit, and which transforms fields, peaks and sky into the most solemn cathedral. This occurs in an evident manner on 26 July each summer, when a small multitude of faithful take their place on the opposite field and sing and pray during the mass of the patron saint’s day. The chapel was blessed in 1996 with the title of Our lady of the Guard and of Saint Anne, celebrated on 26 July.

On 19 July 2000, Jubilee Year, this truly special place was chosen for a day of rest and contemplation by Pope John Paul II. He left his signature in the pilgrims’ book and, to the Bich family, who gave him hospitality, the memory of his reassuring smile. Through the crystals of the chapel it is possible to read the words which marked the start of his pontificate:

“Do not be afraid! Open, I say open wide the doors for Christ!”

And truly, raising the eyes, the horizon opens up in all its grandeur and the walk to arrive here takes on the taste of life, a climb which is difficult and challenging but possible with that interior companionship. In 2014, as soon as Pope John Paul II was raised to the honours of the altars, it was natural to add his name to that of the chapel and to take his statue there beside that of the Virgin Mary to which the pope had given his rosary and blessing.

The trail to reach the chapel of Saint’ Anna is the number 18. 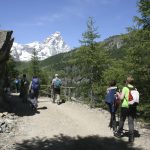 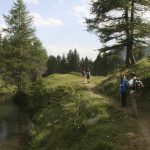 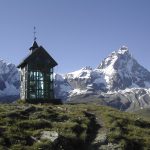 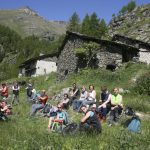